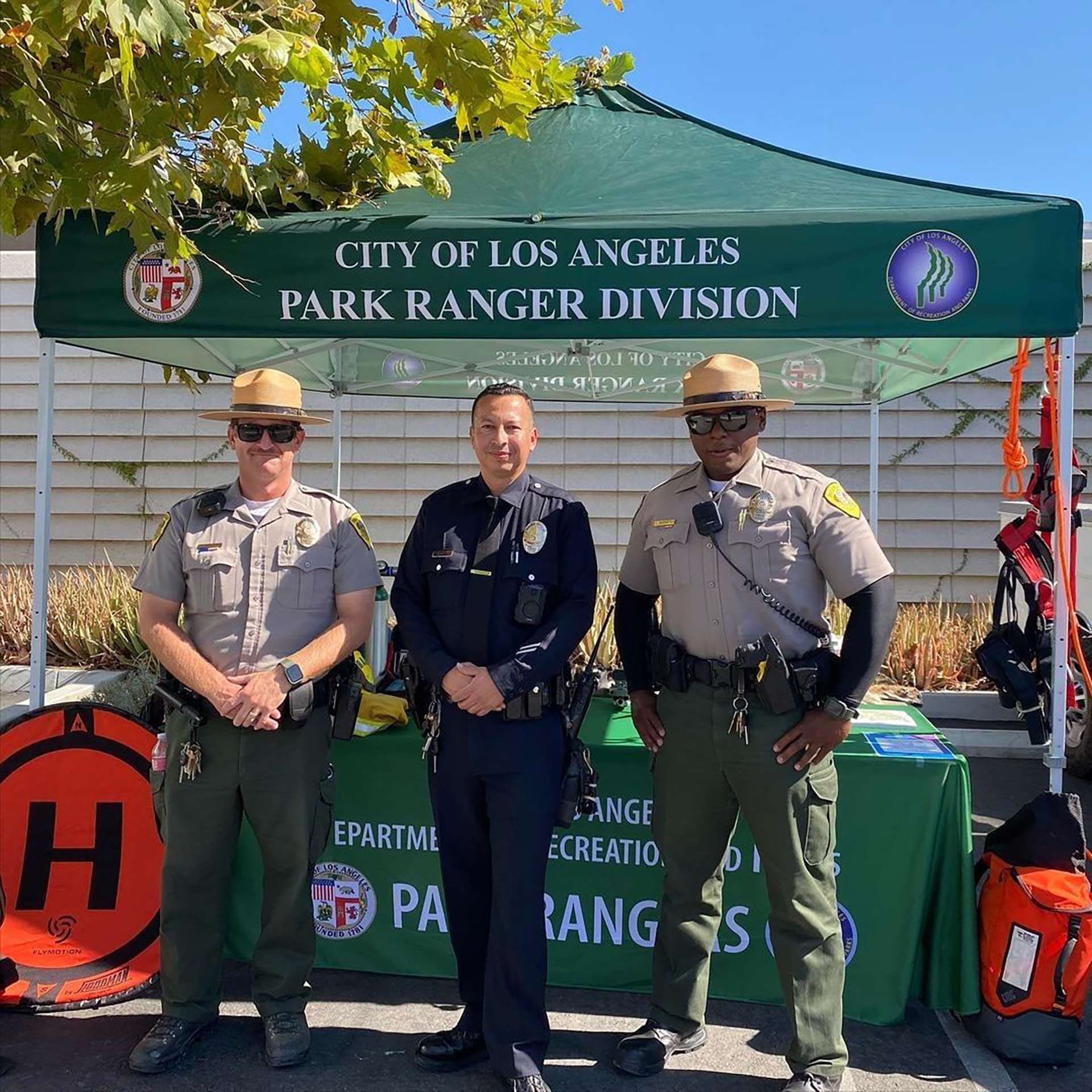 LAAPOA reiterates our ongoing call to arm Los Angeles park rangers as news surfaces that City Councilmember Mike Bonin, who voted against a measure that would do just that, has instead hired armed private security guards to protect his own Council District 11 office from unsafe conditions in adjacent Westchester Park.

The Westside Current reported earlier this week that Bonin has been employing GSG Protective Services of Culver City to guard his office five days a week since January. Local resident Debra Huston told the Current that when she encountered a guard at the office on Wednesday, “I asked why there was security. He [the security guard] said it was because of the homeless … and motioned to the homeless encampments outside Bonin’s office door.” The dangerous state of Westchester Park has been a pressing concern for the community, and Huston said she knew of at least two children who’d been physically attacked in the park restrooms. “Bonin wants security for himself and staff, but he has ignored our pleas for the last year to provide security for the children who want to engage in sports in the park or for the seniors who want to go to the senior center,” she concluded, adding that she planned to insist on security for all park facilities.

Bonin clearly believes Westchester Park is unsafe enough to engage armed security for himself, despite having voted just one day earlier against banning homeless encampments within 500 feet of schools, where residents have noted similar safety threats. The Current also reported that he might be considering providing private security at Centennial Park instead of using the Los Angeles Police Department. Yet in November 2021, Bonin cast the lone vote in the Council’s Arts, Parks, Health, Education and Neighborhoods Committee against the motion to arm City park rangers to enforce park safety. “If having to call the cops is a justification for somebody being armed, then … are we going to then next month start talking about arming LADOT officers, are we going to start talking about arming parking attendants, are we going to start talking about arming librarians?” he said.

Bonin’s specious argument ignores the fact that park rangers are far more qualified than any of those groups — or private security staff — to carry firearms to protect our City parks. L.A. park rangers are experts in their field with thorough knowledge of the terrain they patrol, the people who frequent their parks and the surrounding communities. Accordingly, they have the highest education and training requirements of any law enforcement agency in the city. In addition to receiving the same training as LAPD, park rangers must have a four-year college degree or four years of law enforcement experience, graduate from the Los Angeles Police Academy, have California Peace Officer Standards and Training (POST) certification, receive directed mental health awareness training, provide first aid and search and rescue services, and be trained wildland firefighters. Every sworn park ranger is already required to complete a six-month POST-administered certification course that includes firearm training. POST recognizes the City of Los Angeles Park Ranger Division as a law enforcement agency with full police powers to detain, arrest and book violators and conduct investigations into criminal activity. Its park rangers have the same law enforcement officer status under state law as LAPD: Under Section 830.31 of the California Penal Code, “a person designated by a local agency as a park ranger and regularly employed and paid in that capacity, if the primary duty of the officer is the protection of park and other property of the agency and the preservation of the peace therein,” is designated as a peace officer who may carry firearms if authorized by their employing agency.

“So it turns out Mike Bonin actually does support having armed officers in L.A. parks — as long as it’s private security guards and if it’s to protect his own office, while local residents continue to be subjected to dangerous conditions in Westchester Park,” LAAPOA President Marshall McClain says. “And now he might be talking about expanding that private security to other parks? Can someone please explain how park staff, patrons and surrounding neighborhoods are safer with armed private security roaming our parks instead of properly equipping our highly trained park rangers? Could it have anything to do with the approved extension to a $10 million annual contract for this private security company, GSG Protective Services? Fully equipping the existing rangers doesn’t even come close to that cost.

“As rising crime and violence continue to plague our city and its parks, Angelenos are urgently crying out for a solution, and paying a premium for outside security is not the answer when we already have specialized, trained personnel who know our parks and simply require the necessary equipment to protect themselves and others,” McClain continues. “It’s past time for the general manager of the City of Los Angeles Department of Recreation and Parks, who has the authority granted by the state under 830.31, to arm our park rangers to ensure public safety. This measure needs to be brought forward to the Parks Commission and passed immediately for the security of our city workers, park patrons and communities.”